How did we get here? Reconstructing the genome of our ancient vertebrate ancestor

Genomes as documents of evolutionary history

Our genome and the genomes of other vertebrates have been shaped by ancient evolutionary events that have had a lasting impact on their structure, organisation and function. Recognising and interpreting these events can be harnessed to better understand and diagnose human genetic diseases and also can explain some unusual genome structures in vertebrates. Despite this importance some key questions regarding the number and timing of these early events in vertebrate evolution remain unresolved or disputed. I will talk about how we have learned how to read our genomes as historical documents to reconstruct the ancient genomes and deduce the early events that established the vertebrates in all their beautiful diversity. 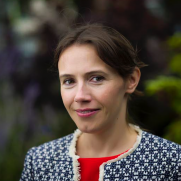 Aoife McLysaght is a Professor in the Molecular Evolution Laboratory of the Smurfit Institute of Genetics, University of Dublin, Ireland. She was educated at the University of Dublin where she was a student of Trinity College and awarded a Bachelor of Arts degree in Genetics in 1998, followed by a PhD in 2002 on the evolution of vertebrate genome organisation.

Following her PhD, she completed postdoctoral research at the University of California, Irvine working with Brandon Gaut before returning to work in Dublin in 2003. Her research in molecular evolution and comparative genomics has been published in leading peer-reviewed scientific journals.

One of the best presentations I have been to at CSAR

After 40 years of attending conferences in technical scientific subjects I can say this was one of the best examples of simplification, dejargonizing and adaption to a generalist audience I have ever seen. Congratulations

A real live wire; knows her subject well and communicates it effortlessly and with evident enthusiasm